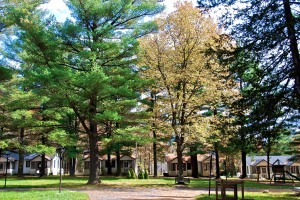 Okay, I’m on board this month with poetry! It’s day 3 so I’m running behind. Here’s the Day 3 poem from Poets.org.  I know it’s April because magically, every morning I get a poem-a-day from them dropped to me via email. Usually I feel guilty that I’m not really participating so without the usual guilt, I begin..

The arch in the bridge. The moment of architecture.
The island where you lost your mother’s keys. The photo she sent
of someone who looks like her walking to the point
where the land becomes reminiscent of dissolving of flesh.
The trees stamped onto our minds like traumas
are supposed to be. The frightening blanks where the stores were.
The sense the owners died. How many people killed by logs,
do you think, over the years? The moon sitting greedily
on your house. The carrying of one another
when young, light, and poisoned. The doorsteps
we were left on. The fox scat. The extra points in school. Who knew
how prominently quarries featured? Only once or twice in a lifetime
does one find the suicide or hear the primordial screaming. The towns nearby
that survive on museums of their earlier burning. The dreams set
in neighbor’s houses. The mounds with hooves and bones sticking out.
The gentle sloping. We will always be swimmers
digging into the thaw. The former newness. The various cuts of meat.
The places cats won’t go. The climbing out onto the banks. The naked man
working harmlessly in the woods. Like a milkweed or fox
you are something that parted the dirt here. The rotting
that sets in when you leave.

A fresh photo where I once spent my childhood summers

Still 19 bungalows, around the U

Still the outdoor fireplace, built by Uncle Sam, the hermit during a lonely winter with only his dog Mike for support

Still the flowerbed in the center, the lawns moved by my dad at the end of his own long work day

Still the forests for Peter Pan

Still the den of Ted E. Bear, the colony’s handyman, filled with promise of secrets, my brother dreamed of exploring

Still the camp house, the handball court, the path down to the pool

And Still just down the hill from the Cherry Hill Hotel

Finally my mother put her foot down and refused to keep spending summers there. We didn’t care anymore. All of us were also ready to move on.

I was quick to shut off my present at Oakwood Cottages.

Just part of my awkward teenage past.

My grandparents held on, until they were too old to travel even the 7 miles from town. And finally it was sold as part of the family inheritance to the present owners, who waited patiently for it so they could own both sides of Briggs Highway.

I did not want to go home again but Tuvia needed a piece of my past.